You might know where the Scandinavian region is, but do you know how the region got that name, and what it means? Since the inhabitants of Iron Age Scandinavia (later known as the Norse/Vikings) didn’t really leave behind any texts (though plenty of runestones), we have to plow through the archives of cultures who actually did document the passage of time.

This leads us back to Greek and Roman explorers and historians who started mapping out northern Europe starting around the 4th century BCE—the first ones to document iterations of the name Scandinavia.

So let’s clear up exactly where the name Scandinavia came from and what it means!

Why Is It Called Scandinavia?

Scandinavia likely stems from the two germanic words Skaðin and Awjō, meaning “Dangerous Island”. The region is first mentioned in writing ~325 BCE as Scandiae by Pytheas, and later by the Romans as Codinavia and Scatinavia, all thought to refer to the Scandinavian peninsula (Sweden and Norway).

The Mediterranean explorers who first referred to the region in writing likely reiterated names the local Proto-Norse population around Scandinavia used (as best as they could). 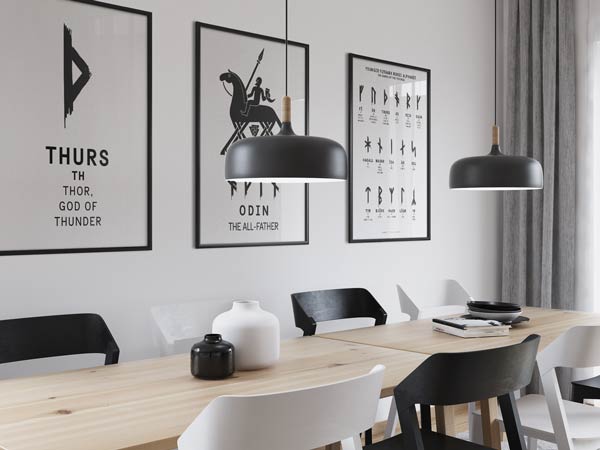 Let’s take a closer look at where the name came from first, and then we’ll get to know the first geographers of the region and what they called it.

The Etymology and Meaning of Scandinavia

The word Scandinavia likely stems from the two germanic words Skaðin and Awjō (pronounced “skah-tin” and “av-jo”). Skaðin means “danger” or “injury”, and Awjō means “island” or “land next to water”.

This would suggest that the word Scandinavia means something along the lines of “Dangerous Island”, which is thought to be referring to the treacherous waters and sandbanks around Scania in southern Scandinavia.

Skaðin and Awjō are likely also where Scania (today the Swedish region Skåne) and the town Skanör (in southwestern Scania) got their names.

Another theory is that the word Scandinavia is connected with the Norse god Skaði, who was either the mother or step-mother of the more famous gods Frey and Freya, and according to the Norse sagas associated with winter, snow, mountains, and hunting.

According to this theory, Scandinavia would mean “Skaði‘s island”, which does find some supporting evidence among the Sami people’s folk tales, which in turn are intertwined with Norse mythology.

For the Old Norse, every cold and harsh winter was brought on by Skaði, the beautiful but dangerous Jötunn (giant) who lives up in the mountains in a hall called Thrymheim — the thunder home. She was a goddess associated with winter, skiing, mountains, and bowhunting, and was as determined and unforgiving, as she was charming and skillful. Read Article Now

Who Were the First to Write About Scandinavia?

Somewhere in the middle of the 4th century CE (we don’t know the exact date) the Greek explorer Pythea embarks upon an epic journey from his native Massilia (today the French city of Marseille) to the northern edges of the known world.

His journey first took him to modern-day Great Britain and Ireland, where he circumnavigated and mapped out the islands extensively.

After this, he sails six days north of what we today would call Scotland, and he ultimately discovers the populated islands of Thule (which most historians believe to be western Norway, possibly Telemark), and Scandiae (which most believe to be referring to southern Sweden).

Pythea’s mention of Scandiae around 325 BCE seems to be the first written reference to what we now call Scandinavia, likely referring to the Scandinavian peninsula of Sweden and Norway (then thought to be an Island).

Some alternative theories include the Shetland Islands or the less likely Iceland (since it wasn’t populated at the time as far as we know).

He continues to explore what is likely modern-day Baltics and Germany before returning to his Massalia, where he publishes his documentation of the journey and tales of Thule and Scandiae.

Unfortunately, there are no surviving copies of this work, so we only know of his journeys from other authors who quote him or refer to his journey in their own books.

1st Century BCE: Mela and Pliny The Elder Describes Scandinavia to the Romans

Around the middle of the first century BCE the Roman Empire’s first known geographer Pomponius Mela set out to map out the northern parts of Europe.

He describes a great bay (“Codanus sinus”) north of Germany, as well as many islands and in particual one that was especially noteworthy in size: Codanovia.

This same “island” was referred to by Pliny the Elder around 77 BCE as Scatinavia.

Pliny was not only a meticulous historian, he was also an admiral in the Roman navy which is how he came into the proximity of what we today call northern Germany, the Baltic Sea and Scandinavia.

When he reached the northern shores of Germania, he described the Baltic sea and the islands we call Bornholm, Gotland, Öland, Åland, Ösel, and Dagö this way:

In this direction a great number of islands are said to exist that have no name; among which there is one which lies opposite to Scythia, mentioned under the name of Raunonia, and said to be at a distance of the day’s sail from the mainland; and upon which, according to Timæus, amber is thrown up by the waves in the spring season.

Raunonia is believed to refer to the island of Bornholm just off the coast of modern-day southern Sweden, or Scania.

He then describes the sea containing the Danish archipelago in this way:

This gulf, which has the name of the ‘Codanian,’ is filled with islands; the most famous among which is Scandinavia, of a magnitude as yet unascertained: the only portion of it at all known is inhabited by the nation of the Hilleviones, who dwell in 500 villages, and call it a second world

Whether it was as Codanovia or Scatinavia, both Mela and Pliny seem to refer to the Scandinavian peninsula containing Sweden and Norway, then thought to form a great island at the edge of Europe (much like Britannia).

The southern part of the Scandinavian peninsula was after all separated by water at one point from the northern half, which is likely why it was believed to be an island for a long time after.

Around 500 CE Jordanes used the term Scandza to describe where the Goths came from (both the visigoths and ostrogoths are thought to have migrated from southern Scandinavia).

ℹ️ I’ve written an article where I dive deep into the origins and journeys of the Germanic tribes. So if you’re curious about their Scandinavian links and how they influenced Europe, go check that out.

Was the Region Always Called Scandinavia?

The idea of using one common term to refer to Swedes, Danes, and Norwegians has been laughable through most of history, due to centuries of regional wars.

But academics in the region slowly started championing a common Scandinavian identity during the 18th century liberal movements, with more cooperation between the countries seen as advantageous for all.

The term Skandinav (Scandinavian) started being used to identify a Swede, Dane, or Norwegian under a unified modern term, inspired by a common past and usage.

Authors such as Hans Christian Andersen started writing about and celebrating similarities between the Scandinavian countries in the 19th century, with poems such as Jeg er en Skandinav (“I am a Scandinavian”).

Soon regents from all three countries were embracing Scandinavianism as an ideal, and tensions between Prussia and Denmark spurred on the case for a unified front against volatile neighbors even more.

And when the first and second world wars finally broke out, the regional bonds grew even stronger as all Scandinavian countries were striving to uphold a neutral status during both wars (but not all able to in the end).

There is a lot more to be said about this though, as many countries (including the US and UK) usually include the Nordic countries when they talk about Scandinavia and Scandinavians.

Despite the Scandinavian countries common past, there is even more regional cooperation in the Nordics as a whole these days, being seen as the more common umbrella in use today.

To dive down this rabbit hole, check out my article on the differences and uses of Nordic vs. Scandinavia.