Swedes vs. Danes: How the Scandinavian Cultures Compare

To outsiders, Swedish and Danish people might seem very similar; as Scandinavian brothers and sisters with a common history and ethnicity. But how do the two cultures actually compare, and how do they get along with each other?

ℹ️ How this article was researched
Having grown up in Malmö, Sweden (a 20 min train ride from Copenhagen, Denmark), I’ve learned the similarities and differences of Swedes and Danes firsthand. Living here I have met and interacted with Danes on a weekly basis my entire life, have friends and family who work full-time in Denmark, and have befriended and kept in touch with several Danes that I’ve met traveling the world.

On top of my personal experiences, I also had a chat with friends on both sides of the border about their view on differences and similarities between Swedish vs. Danish culture, and Swedes vs. Danes as people. I’ve also included any external sources where it can be helpful, and to keep this article as neutral and unbiased as possible. I do not personally feel one culture is better than the other, but sometimes it can be fun to do a friendly comparison!

What are the differences between Danes and Swedes?

Here are the most commonly observed — and very generalized — personality traits I have noticed in Swedish and Danish people going about their everyday life:

These are general tendencies observed in life and business by myself and others, and in some cases stereotypes that do not represent the majority. So this does not mean every Dane or Swede is like this, but rather that you are likelier to see these characteristics in the respective country they are listed under in the table.

In a business setting, Swedes have been observed to be generally more team-oriented, like to delegate, want to be inclusive, and prefer clear instructions. Danes are generally more individualistic, prefer a stronger hierarchal structure, values effectiveness over the status quo, and have no problem acting independently.

In life Swedish people can generally act calm and reserved, seem a bit cold, like to keep things professional, prefer a well-planned approach, and believe “maybe” is a conflict-free way to say “no”.

In contrast, Danish people generally live a more emotional life, are more jovial, have no problem having a business meeting over a beer, can act spontaneously, aren’t afraid to step on toes if it means effective decisions, and thinks a “maybe” means a possible “yes”.

Most of these differences have also been identified by either historians (Herman Lindquist, 2014) or prominent business people (Peter Lybecker, 2014) as typical differences between Swedes and Danes. This indicates to me that they are indeed cultural and unbiased differences, and not personal or biased ones from myself or my friends.

As culture and personality are wide spectrums, there will of course be plenty of examples straying away from these simplified stereotypes.

Still, these stereotypes can be helpful in differentiating two cultures that can be pretty similar in most other ways, and hopefully we can all learn things from one another that can bring us closer in the end!

Let’s dig a little deeper and explore some more cultural differences between Swedes and Danes.

Swedish and Danish everyday food is pretty similar; from traditional courses consisting of mostly meat, a vegetable, and potatoes, to international food such as pasta or tacos.

That said, the two countries do usually have different versions of each type of traditional course, so let’s take a look at how they compare within each category:

Swedish vs. Danish foodWhich food is the best?
🇸🇪
VS
🇩🇰
Best Meatballs 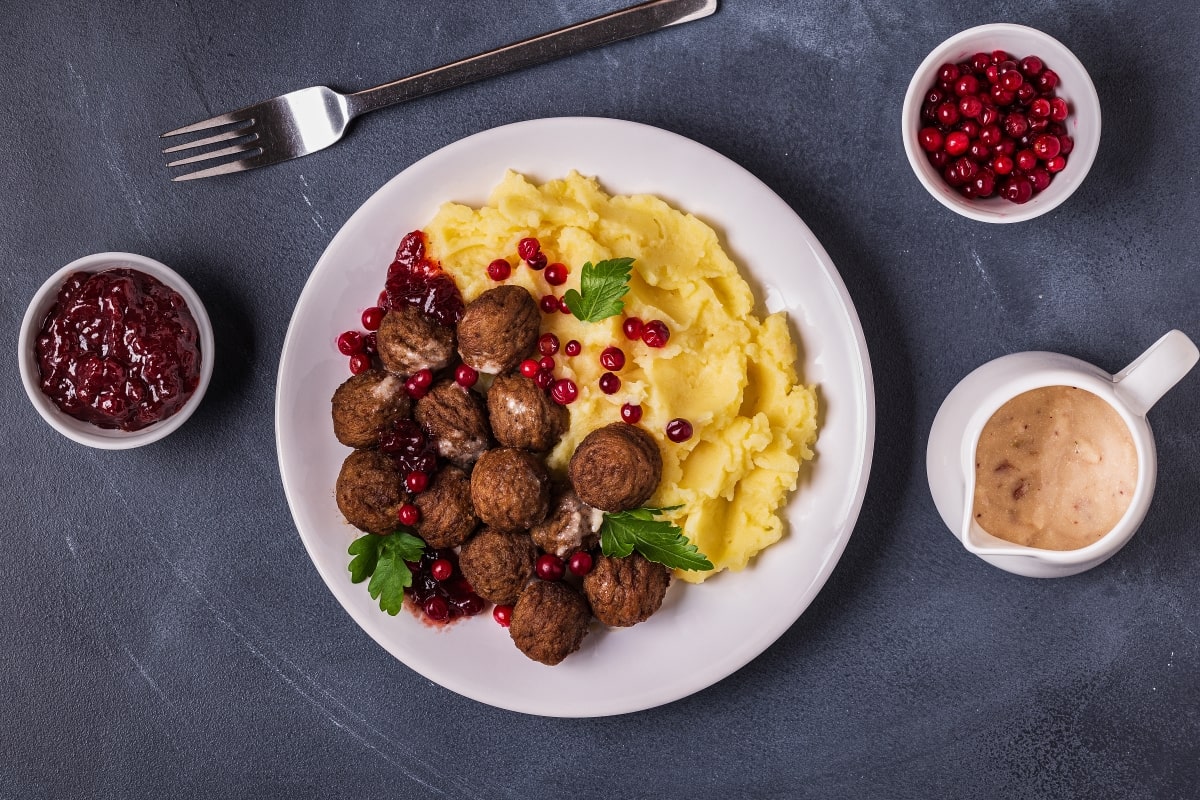 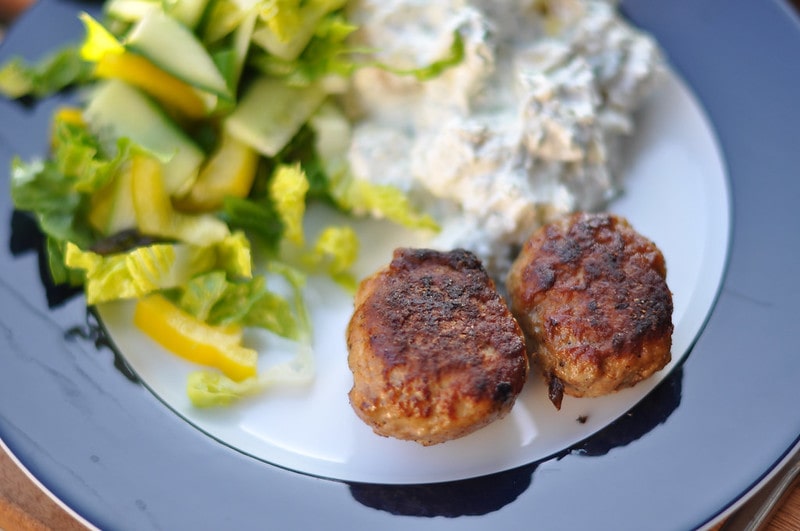 Frikadeller
(Pork meatballs w/ parsley sauce)
🇸🇪 Swedish Meatballs Win This Round
While the Danish Frikadeller are good meatballs, the Swedish meatballs offer the staple lingonberries and a mix of pork and beef (as opposed to pork-only in the Danish kind).
Best Hot Dogs 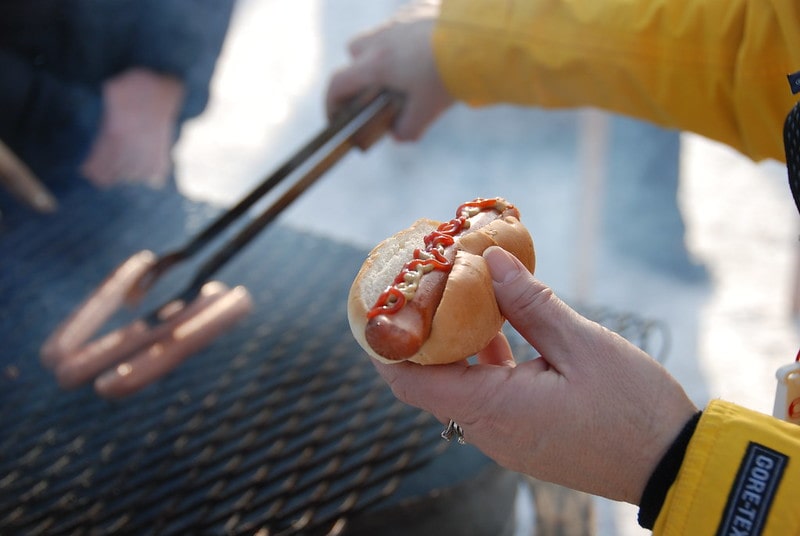 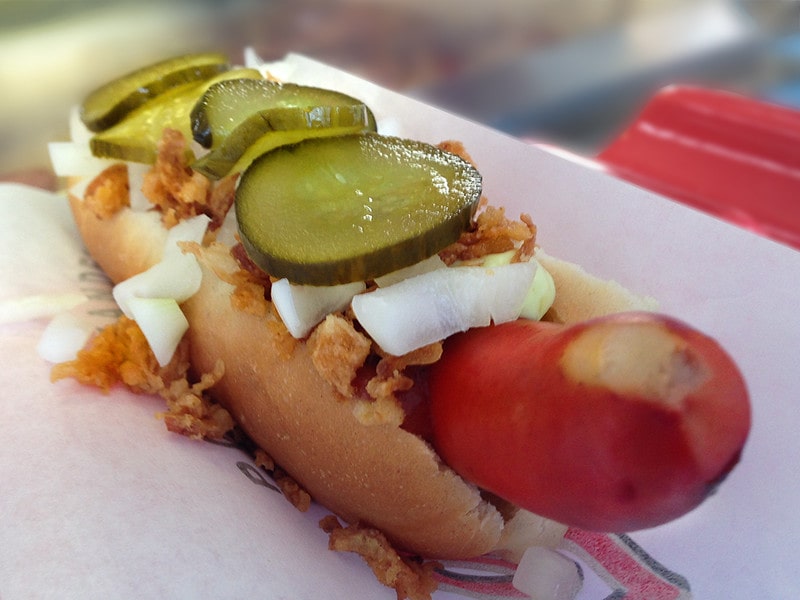 Rød pølse
(Red hot dog)
🇩🇰 Danish Hot Dogs Win This Round
One might not think there can be so much difference in a simple art such as hot dogs, but the Danes have really perfected the fast food sausage, and offer superior-tasting condiments. And let’s get real here, the red color does make the Pølse stand out too.
Best Sandwiches 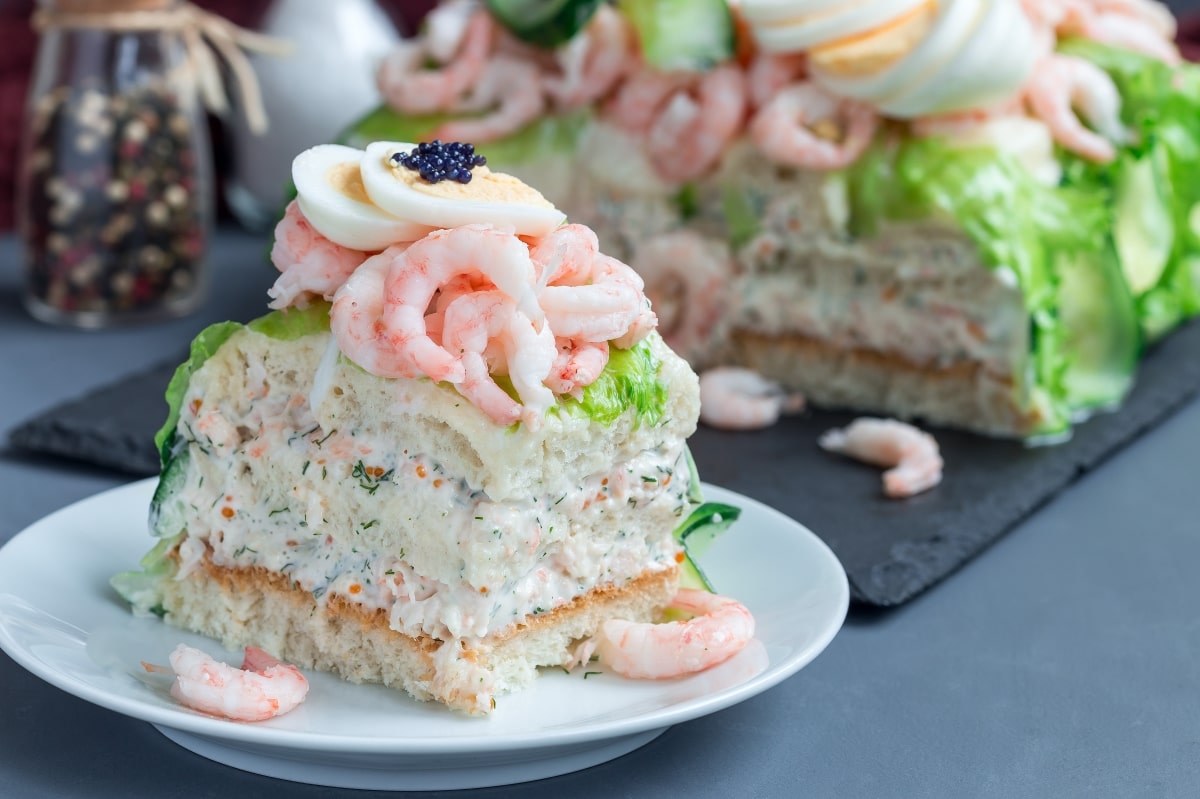 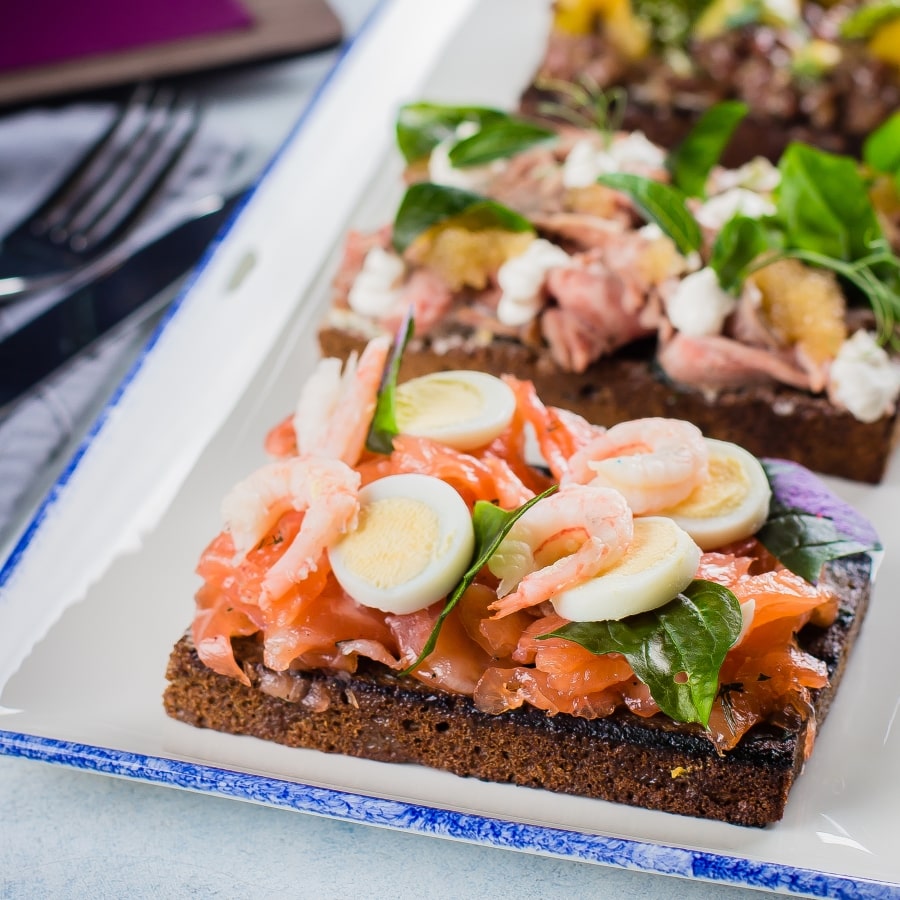 Smørrebrød
(Open-faced sandwiches)
🇩🇰 The Danes win this round
This one goes to the Danes, as their delicious, creative, and generally very healthy (if you ignore the accompanied snaps) open-faced sandwiches are known around the world (and for good reason too!). The Swedish Sandwich Cake does however deliver a big punch and guaranteed knockout for anyone who tries it.
Best Cinnamon Roll 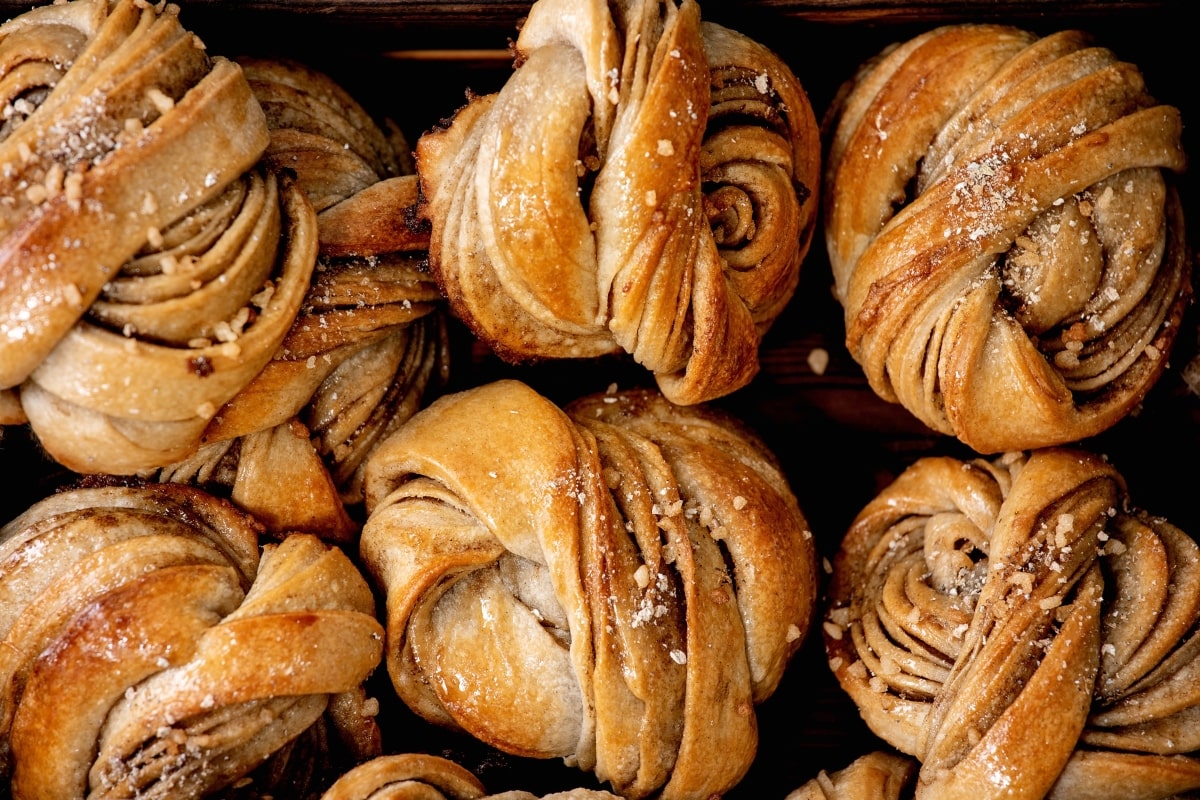 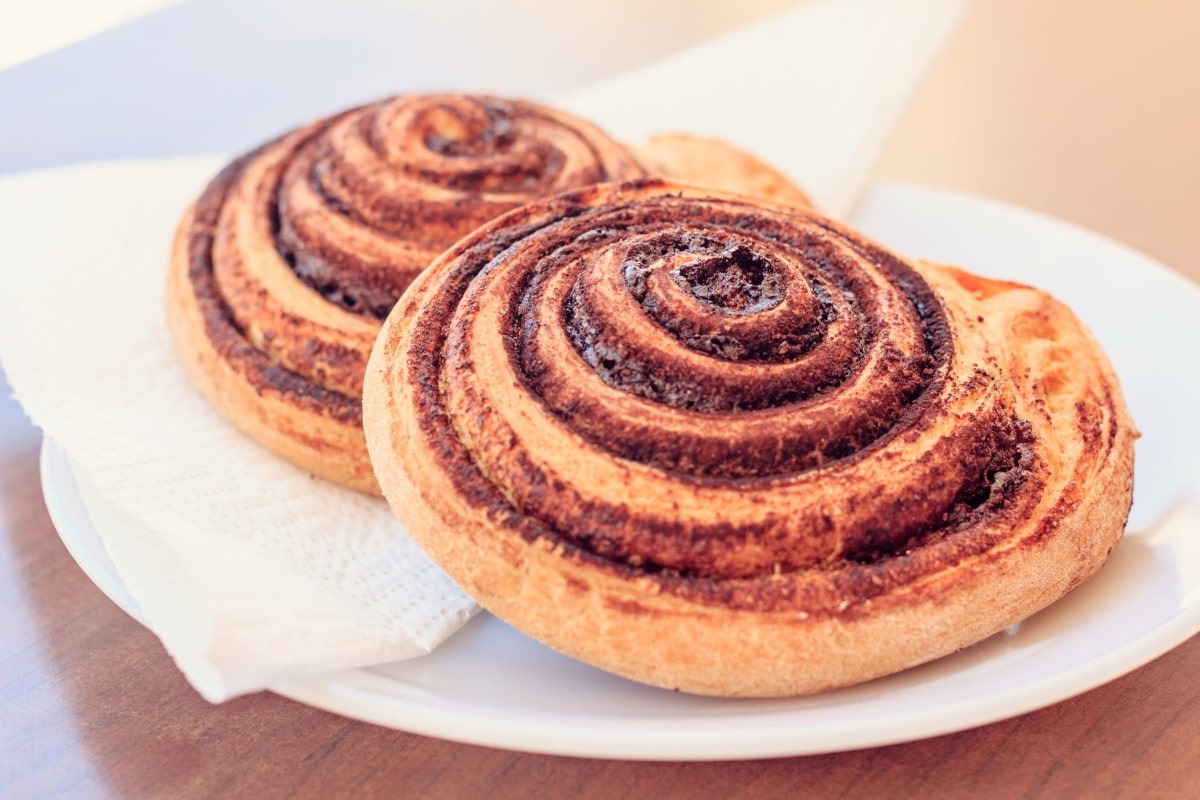 Kanelsnigel
(Cinnamon Snail)
🇸🇪 The Swedes win this round
Swedish cinnamon buns — in all the delicious varieties they come — from the good bakeries are seriously addictive, but the real winning formula is how popular the homemade cinnamon bun is among Swedes. Anytime you’re invited over for coffee at a Swedes place you’re likely going to see a cinnamon bun, roll, or “wreath” (look it up, they are basically huge cinnamon bun creations).
In the categories we’ve included so far, it looks like a boring Scandinavian tie between the two countries food-wise, which isn’t surprising since they are pretty similar and only stand out in very specific instances (like the ones above).

Both countries are huge exporters of music, and frequently have artists featured on the Billboard Top 100 in the US and UK. Sweden does stand out as more successful in this regard, with the swedes being only one of three countries in the world with a positive net export of music (along with the US and UK)

Adding in songwriting credits reaffirms the strong music culture of Sweden, with examples like Max Martin (having written 24 No. 1 hits; third most in the world behind Paul McCartney at 32 and John Lennon at 26).

Denmark has about half of the population of Sweden and has still produced more Oscar-winning movies, so if we were to generalize a bit, the Danes seem to have a stronger film culture than the Swedes, while both excel in the recent huge export: Nordic Noir

The recent rise of the Nordic Noir and Scandi Drama genres shows a strong story-telling culture in both countries, beyond the famous Viking sagas of the past both also have in common.

Both countries have produced top-quality Nordic Noir and Scandi Drama stories in book and TV form, and the Scandinavian drama genre as a whole is rising in popularity internationally speaking, primarily due to Swedish and Danish productions.

The joint Swedish/Danish venture ‘Bron / Broen’ has been especially well-received by viewers and critics, achieving a 8.6 average rating on IMDb, and leading to an American spin-off called ‘The Bridge’ and starring Diane Kruger and Demian Bichir.

If you’re interested in finding some more Nordic series to binge, I have written an article listing the 19 best Nordic Noir and Scandi Drama series along with links on where to watch them. Go check it out!

Do Danes and Swedes Speak the Same Language?

Despite being Nordic neighbors Danes and Swedes do not speak the same language, but two separate ones: Danish and Swedish. Both languages are part of the North Germanic language group and East Nordic sub-group, but are not mutually intelligible. They are both considered Scandinavian languages.

Do Swedes and Danes understand each other?

Looking at a 2021 study by the Nordic Council, it looks like Danish people understand Swedish a lot better than vice-versa, but overall there aren’t many who can speak and/or write each other’s language in either country. They do however speak English with each other around as much as their native language, and thus avoid any communication issues.

Let’s go through this in more detail.

But that’s not the only way Swedes and Danes communicate with each other. Let’s look at English proficiency in the two countries:

94% of Swedes and Danes can speak and/or write English, while only 11 percent of Danes and 2 percent of Swedes can say the same of each other’s language.

Furthermore, the study shows that most Swedes and Danes think it is sometimes easier to express themselves in English rather than their national language, and 49% of Danes and 64% of Swedes think it’s sufficient to known English as your only foreign language.

This clearly indicates something I’ve also personally observed so many times Swedes and Danes meet:

Swedes and Danes are very likely to speak English with each other if they run into hurdles with their respective mother tongues, especially if the Swedish part of the conversation lives outside the southern Swedish province of Skåne (Scania).

The study also specifically confirms this, with 57% of Swedes and 65% of Danes naming English as one of the languages they use to speak with their neighboring Scandinavians.

Do Swedes and Danes get along?

Swedes and Danes might be a bit different but generally get along great, especially while meeting outside of the Nordic region on travels or business. Despite a history of wars and conflict between the countries, the two nationalities also share a common history and heritage, as well as most modern-day political views.

Both nationalities stem from the same Nordic Bronze Age culture that stretches back tens of thousands of years, share a very close history, and look very similar—but there has been plenty of conflicts between the two up until recent history, with a total of 34 wars waged between the two countries since the middle ages.

These days, however, the two have more of a friendly but sometimes jealous and squabbling sibling relationship.

The Öresund bridge that connects Malmö and Copenhagen isn’t just the symbol of one of the most successful Swedish-Danish joint TV productions (Bron / Broen), it has been absolutely instrumental in bringing Swedes and Danes closer together in most parts of everyday life.

Swedish workers from Malmö have started to take advantage of higher salaries in Copenhagen, while more and more Danish homebuyers are choosing to buy a cheaper house and commute from Malmö.

But of course, the proximity of the two countries, and especially Copenhagen and Malmö, has also led to some conflicting interests and views.

Danes in Copenhagen hate it when drunk teenage Swedes from neighboring Malmö invade the streets of their city (the legal drinking age is lower in Denmark, 16, than in Sweden, 18). Swedes in Malmö similarly aren’t too fond of Danes from Copenhagen — with a comparably higher average wage being a much larger city — coming in and buying houses and driving up house prices in the much smaller and cheaper Malmö.

Is Vikings Worth Watching? (Vikings vs. GoT vs. The Last Kingdom)

Is Scandinavia a Country? (Spoiler Alert: It's Three!)

Can You Get By With English Only In the Nordic Countries?

Should I Learn Swedish or Norwegian? (Answered with Data & Graphs)

GET NORDIC AND SCANDINAVIAN TIPS

Subscribe to our newsletter to get the latest Nordic / Scandinavian trends, travel tips, hidden gems, and much more.